Andrew Biggs was born in 1958 and is now married with 3 grown children. Joining the army at age 19, Andrew became an apprentice signwriter.

After 6 years in the army he started his own signwriting business (Award Signs) based in Christchurch that has been going strong for 25 years. For the last 12 years Andrew’s daughter Rebecca has worked alongside him as a fully qualified signwriter.

In recent years, as the sign and graphics industry became more computerised, Andrew increasingly desired to get back to the grass roots of “hands on” creativity instead of just clicking a mouse.

On a whim at an auction Andrew brought the book “the art of engraving” by James Meek and as soon as he opened the pages he was hooked. Fascinated by the sheer skill and artistry that was represented between the pages, he brought the necessary tools and started practicing in the evenings and weekends, quite often working 40 plus hours a week and then engraving for another 40 hours.

Very quickly a hobby turned into a passion and it was about this time when the hand of friendship was extended from across the Pacific that Andrew became firm friends with John Barraclough, a renowned engraving teacher living in California. This led him to travel to the United States where he became an international member of the Firearms Engravers Guild of America (FEGA) and had given a seminar at their annual convention in Reno. Since then Andrew tries to make an annual pilgrimage to meet up with fellow travelers and friends in the engraving arts. Andrew has also been to the Grand Masters weekend in Emporia Kansas which is hosted by GRS who are a leading supporter of the engraving arts and supplier to engravers all over the world. It was here that he met and became friends with even more well known international hand engravers.

Because of the wonders of high speed internet connections Andrew is also the editor of the FEGA Engraver magazine which is a quarterly, full gloss magazine devoted to gun and other forms of engraving. This keeps him in touch with international trends and techniques that are freely shared amongst engraving artisans from all over the world. 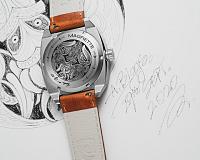 “The funny thing about the engraving is I absolutely love doing it.”

It’s a little bit of magic to draw something and then cut it in the metal and watch the design evolve in front of my eyes. Everyone talks about wood having a life to it but so does steel and metal and it’s just a matter of trying to bring that out with the design and cutting. Most engraving designs are based around European traditional scroll and acanthus leaves and variations of that theme. The variations are endless and with each engraving artist, their style can be seen through the way these scrolls are designed and the elements that are added to it. Flowers bursting out from the base of a scroll or hidden animals and grotesques intertwined within the scroll framework all add to the personality of the work.

Andrew has taken these concepts and added an Oceania element to his designs that are truly unique and readily identifiable as coming from Aotearoa New Zealand.